The 2023 Piston Cup Season will be proven to be an exciting season!

Checkered Flag Waver is in charge of making these races.

For 2023 there will be a new schedule change. The Vitoline 350 also known as the first MSOTS race will be replaced by the Lil' Torquey Pistons 250 at a new track called the Nurburgring. The hardest track ever. And one of the longest in the world. Road courses return to Piston Cup. Instead of the normal 200 laps. The race will be 100 for the Piston Cup. 100 for Piston Cup B. 50 for Xfinity. 20 for Juniors. The same length for all 3 series' for the other new change replacing the second Texas race aka the Intersection 350 is Monza a road course. For all 3 series' it will also be the Amazon 250.

4 part-timers like last season will enter this season and will go rookie in 2024. They are Tyler Reddick for JR. Motorsports, Carstopher Bellcones for Yahoo!, Austin Cindwreck for CarShop, and Cole Thruster for Spring Vault. They all will race the same races in the season and it will be 15 races they race. To see the races they will race, please visit this page here: https://piston-cup.fandom.com/wiki/2023_Part-Timers_Appearance_Races?so=search

The entry list is only up to 61. All "RUMORED" Racers at this point will have to RACE their way in, in a clash type race which is 200 laps at Florida International Speedway sometime in the summer. The top 4 will advance to the Piston Cup. The rest will go to CARCA, Xfinity, or Piston Cup B. Piston Cup is trying to avoid Piston Cup C from happening. The entry list is from 42 cars to 45 per race. So about 16 cars could not make the race or less depending on part-timers racing in certain races.

So over Piston Cup years there have been a number of struggling teams. Any team that ha struggled so much in 2022 and before in the past, will have to withdraw into a different series. Piston Cup B may be their best bet because a lot of the sponsors already have teams in CARCA and Xfinity. They can work their way back in by going into Piston Cup B by going through the process of being in the top 4.

Meet The Racers will NOT be happening this season due to lack of racers being able to possibly make the racers when it is their turn on the broadcasting show. This has already happened a few times in 2022 as well. Other new features will be said later on.

Practice will remain the same with 1 session but instead of 1 hour it will be 30 minutes due to the Piston Cup taking up all RSN's TV time. THERE ARE OTHER RACING LEAGUES!!!!!!!!!! Qualifying will be different with RACES! So qualifying race number 1 or Heat number 1 will have every entered racer in. The top 10 finishers in it will be advanced to the next round. The racers who do not make it do not participate and start in the race where they finished, or if they did not make the cut off line of number of racers allowed in the race they get sent home. The top 10 racers in heat 2 are combined into the rest of the field and that is qualifying for 2023. THIS IS ONLY FOR PISTON CUP. Other series' are normal qualifying.

Natalie Certain will continue to announce the races but for the fourth time she gets a new companion. Strip "The King" Weathers will replace Dale Earnhardt Junior is is currently the owner of JR Motorsports and Tyler Reddick's boss and is managing him and his team/racing hall of fame of racing historical stuff. The pit-reporter will be Milo Carson the brother of John Carson Clix Cola Elementary racer and future PCB 2023 racer as it has been since 2020 with Milo Carson.

NO RUMORED RACERS ARE INCLUDED YET.

Gallery (? Marks equal the driver may not be here but hasn't found a replacement yet) 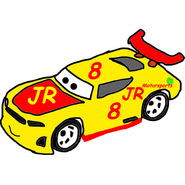 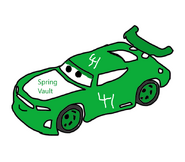